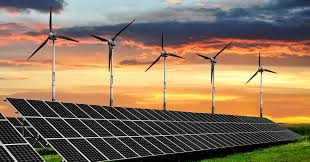 Renewable energy production and use has grown at an overwhelming rate – the acceptance and uptake of this technology has been greater than anticipated with countries continuing to set target dates for converting to 100% renewable energy [1].

At least 30 countries generate more than 20% of their energy from renewables, and 120 countries have policy targets for longer-term shares of renewable energies. The European Sustainable Energy Vision outlines the transition of the energy supply and demand for the 27 EU countries to 100% renewable energy by 2050 [2] which was then revised to 2040 [3].

Figures 1 and 2 show that solar PV has the highest growth rate, however recently large scale CSP has been gaining a lot of attention, and per kw, wind power has the fastest growth [4].

A number of challenges arise with the use of renewable energies. Firstly, energy is not ‘on demand’ and therefore may not always be available when required. This issue is more pertinent in terms of a source like solar, which is only available during sunlight hours. The practiced solution to this problem is simply to have a combination of different power generation sources, such as those listed in Figure 2.

An important fact to note is that with the exception of solar PV (which creates DC through the photovoltaic effect), renewable sources create power through the use of a generator which is driven by a prime mover. The prime mover can be wind, steam from

A second challenge with renewable energy is the land size required to sustain the planet’s energy needs. For a move to 100% renewable energy every step must be taken to design the  smallest footprint. To do this energy systems must be designed to be as efficient as possible. The generator is no doubt a key factor in these systems and should be designed and retrofitted to meet the prime mover’s needs.

Accepted facts about the most efficient generators are:

1.They use permanent magnets which leads to

These are all concepts well-known to Radial Flux Laboratories (RFL), however, not satisfied with this, RFL is pushing the envelope by modelling and developing new configurations tailored to improving the efficiency of generators to integrate seamlessly with the renewable energy source.

Future posts will describe RFL’s sophisticated approach and design on developing generators that integrate with wind turbines, and the development of DC generators which have many advantages including combating harmonics produced by non-linear loads.