The array of electrically powered systems used in the military has expanded beyond anticipation over the past decade and is continuing to grow at an unprecedented rate.

Unfortunately, deployed power systems have not been upgraded to meet power requirements.  The Army has an extremely rapid, mobile, spontaneous and agile deployment, making its power solution requirements some of the most complex.

The Army currently relies on power generation from a series of wound rotor diesel generators ranging from single-phase 1.3kVA generators up to three-phase 60kVA generator sets.

The current scenario for an Army deployment is to work the ‘power planning’ around each mission, this dictates the power generation and distribution to be deployed. When the mission capability increases, larger generators are needed to handle increased loads. As the mission decreases, smaller generators are required to replace the larger ones in order to keep the generator load balanced.  This causes logistical problems and breaks the scalability and modularity requirements associated with an Army deployment.

Permanent Magnets Synchronous Generators (PMSG) like those developed by RFL Alternators have significant advantages over the conventional wound rotor generators. Firstly, load balancing. Although load balancing is recommended for PMSG technology and should be practised, it does not bear the importance that it does on traditional wound rotor generators, and certainly does not need to be as closely balanced.

Perhaps the most significant advantage with the PMSGs is they can be paralleled. This

https://drbocklet.com/tramadol-online/
eliminates the need for significant power planning. A “one size fits all” generator can be deployed, take for example an 8kVA generator that could run the minimal load, as the mission capability grows a second generator is paralleled, and so forth and so on. The reverse action happens as the mission capability is reduced. Generator paralleling brings with it a number of advantages including:

Due to power demands in vehicle mounted configurations, recently the Army has been fitting vehicles with an Auxiliary Power Unit (APU). This APU has been a DC PMSG, which was chosen for two main reasons. Firstly, it eliminates the need for the vehicle to comply with strict high voltage standards and secondly, nearly all electrical equipment runs off DC voltage, so the need for rectification and voltage step-down is eliminated thus saving efficiency.  To meet these demands RFL Alternators have recently developed highly efficient DC PMSGs, which have an optional 24VDC and 48VDC output.

RFL generators are designed with an embedded permanent magnet synchronous generator using neodymium magnets. This clever design leads to highly efficient robust generators. They are smaller in size and lighter in weight than traditional wound generators and don’t have the need for complex electronic components – this dramatically increases reliability.

Our next post will reflect upon RFL Alternators have teaming up with an Australian company specialising in remote area power and independent energy to provide rugged and reliable generator sets to the Australian Army.

Electric Vehicle technology and the role of Permanent Magnets

RFL teams up with Eniquest – the result: compact, rugged and highly efficient...
Scroll to top 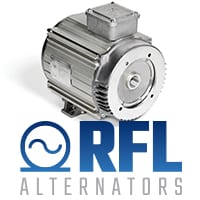